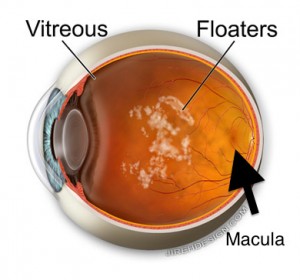 The energy in the YAG laser is used to cut tissue inside the eye.  It is most commonly used for an “after cataract” for patients who have an intraocular implant.  The YAG “cuts” a hole in an cloudy tissue which holds the normally clear intraocular implant.

While other types of laser can deliver heat energy, the YAG cuts tissue in short bursts of power.  These bursts cause the tissue to jolt or snap.

Floaters in the Premacular Bursa

Often there are said to be floaters located just in front of the macula.

The concern with the YAG laser is the potential for the YAG to directly damage the retina.  Focusing the power of the laser so close to the retinal surface when treating a floater may cut the retina and damage the macula due to its close proximity to “targets” lying just in front of the macula.

A vitrectomy instrument safely cuts away the vitreous by a combination of high-speed cutting and aspiration.

At the end of the vitrectomy instrument is a small hole, or port.  A vacuum creates suction.  Tiny bits of vitreous are sucked into the port.  As soon as the vitreous gets aspirated into the port, it is cut away.

This process occurs thousands of times per minute.

Vitrectomy cutters can remove floaters anywhere in the vitreous.  Those near the retinal surface can be “aspirated” away very similar to the way a vacuum cleans the floor without actually touching the surface of the floor.

The rapid cutting action makes it very difficult to cause inadvertent tears in the retina.